Flowers in December? or, How to Cure a Hangover

Oh dear. The party last night was much too much fun and I enjoyed myself much too much. Today I was paying for it when the sun finally came out. I decided that the dog and my head needed a really long walk, so we went along College Street west to the bridge over the railway tracks and up the Western Toronto Railpath to Bloor. Although we've had a number of nights when the forecasts were for several degrees below freezing, I was amazed at the diversity of flowers still in bloom.

Of course the usual suspects, sweet alyssum and calendula, were going strong. To my mind there are few experiences to match coming upon a steep front yard slope covered with sweet white alyssum in late fall. If the sun is out and the temperature just high enough, the wonderful perfume of this simple, unassuming annual is incomparable.

Roses in December are more surprising, especially as I saw so many colors and forms. This we owe to the breeder's use of Chinese roses (Rosa chinensis) in creating modern teas - the Chinese species are from warmer climes and tend to keep blooming (and make tea roses less hardy here).

It was probably only 5°C so of course we walked on the sunny north side of College. Many of the houses here are very close to the sidewalk and typically have small 1-2 foot wide gardens just below the porch. At this season that sunny position and the shelter of the house walls to the North create miniature Mediterranean microclimates. In his blog on the container gardens at Powys Castle, Barry Parker has given us some wonderful images of what can be done in a cool climate if you have a south-facing wall...

Along College in these postage-stamp gardens I saw chrysanthemums, snapdragons, purple petunias, and even marigolds and one large dahlia still in bloom. The last two made me stop and look twice - if you've grown them you know they almost literally melt away in a frost. Too bad I didn't have my camera with me!

We reached the entrance to the Railpath and paused to look at the memorial to cyclist Jenna Morrison. She and her unborn child were killed at that corner under the wheels of a truck.
It was very sad to pass that memorial (which has grown considerably since the picture above was taken) to the Railpath, which wouldn't have come into being without the efforts of many ardent city cyclists. The path is a fantastic achievement, and as I walked along it enjoying the late-blooming goldenrod and New England asters, I wondered how our Horticultural Society could help beautify the space and at the same time create a living tribute to Jenna.

The image that kept popping into my head was of a sunflower I grew this summer with palest yellow flowers, some with central white spots. One can buy flower seeds very economically by the ounce or larger quantities, and it would make a wonderful volunteer activity on a mild May day to wander along the path poking seeds in the ground here and there. The white centre mirrors, in my mind, the white "ghost bike" which cyclists put at spots where one of their number has died.

I became more excited about this the more I thought about it. The path is long and narrow, and it's not really feasible to do a maintained garden. Instead we would have to plant things which naturalize, so this ties in perfectly with my Pollinator Gardens native plant goals. There are some stretches where there is a ditch between the path and the railway which has moister soil, yet doesn't seem to have any of our beautiful native wet meadow plants. Here rather than seed, I'd imagine using plug plants or 1-year old perennials (sparingly, because of cost).

As I was thinking of this along came Hort member Henrietta Markus on her bike - we talked and she thought it was a fine idea. So, I've discussed it with one member already - let's hear your thoughts! Comment here if you like...
I'd especially like the Hort to partner with other groups, say a cyclists group and the Railpath folk, and perhaps seek a small grant from Evergreen for this. I will propose this in our newsletter and to the Board once I've been in touch with potential partners.

As the dog and I walked back I enjoyed geraniums and fuchsias in hanging pots on front porches, along with the deluded viburnum that had come into spring bloom. We were nearly home when I saw a Forsythia in half-bloom. That pleased me because I had cut a branch from one of my Forsythias a day earlier that had a single bloom, and arranged it in a vase with the golden Graham Thompson rose by David Austin and some golden Clematis tangutica from a nearby back lane fence. Today I added a spray of goldenrod from the railpath and had a golden December harvest.

In fact, gold seems to be my garden's pre-solstice theme. Here are two more views of it: of a golden Explorer rose in bud with the puffy white seed heads of Japanese anemone as backdrop, and of the blackberry vines on our west wall still trying to figure out if fall is here or not.

Work by Clement Kent is licensed under a Creative Commons Attribution-NonCommercial-ShareAlike 3.0 Unported License. Images by other photographers are subject to stated rights.

Frank Cabot, creator of two great gardens - Les Quatre Vents in Quebec, and Stonecrop Gardens in New York - died recently. His book "The Greater Perfection: The Story of the Gardens at Les Quatre Vents" won much acclaim. Does the Hort library have a copy, I wonder? 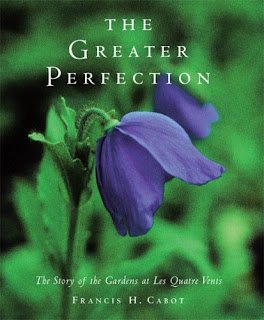 Cabot co-founded the Garden Conservancy to help preserve excellent gardens in North America. As we've enjoyed hearing Barry Parker's stories of visits to great Welsh gardens, it's interesting to note that Cabot helped preserved the gardens at Aberglasney. Read a recent blog entry from Barry about Aberglasney and the Cabot's role there.